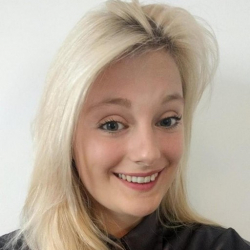 Rosie Greaves
Bridal Makeup Lover at Glamour n Glow
If there's one style of makeup Rosie's obsessed with, it's bridal makeup! She loves how simple, yet jaw-dropping, bridal makeup can make anyone. She believes every bride deserves to feel beautiful, so she's here to help you find beauty products you'll say 'I do' to!

If you’re anything like me, you LOVE experimenting with new eyeshadows. So, when the opportunity presented itself to review the Maybelline Color Tattoo, I jumped at the chance. While I was growing up, my Mom was a beauty therapist, and I remember when I was a pre-teen, her teaching me how to do my makeup properly – ever since then, I’ve been hooked.

That’s enough preamble at me and my obsession with makeup; let’s take a closer look at what the Maybelline Color Tattoo has to offer!

Spoiler alert: I was pretty impressed!

All in all, I was a big fan of the Maybelline Color Tattoo! Although its 24-hour fade-proof promise didn’t quite live up to the hype, but it was pretty darn close. I reckon with a good setting spray, you could indeed enjoy 24-hour coverage.

So the Maybelline Color Tattoo is a cream eyeshadow that promises to last 24 hours on your skin. Apparently, this is Maybelline’s most long-wearing eyeshadow, with it claiming to use ‘innovative pigment technology for a super-saturated color.’

What I love about this particular eyeshadow is that, apparently, all of its shades boast translucent pearl and metallic pigment to create a shimmering effect.

However, I have only tried one shade, so I personally can’t 100% vouch for that. However, if this is true, and based on my experience (more on this below), I think the Maybelline Color Tattoo range makes a great go-to if you’re looking for a glamorous evening look or a slightly more dramatic daytime aesthetic.

For those of you who are interested in this eyeshadow’s ingredients, I’ve listed the core components below:

The marketing surrounding this product describes it as ‘melting’ onto your eyelids and promises easy application. Both of which I can confirm is true!

All you have to do is put a small dot of eyeshadow onto your eyelid and gently blend it wherever you want it to appear. Then, you can either use darker shades to provide the finishing touches to your eye makeup for a smokey effect.

Or use the lighter hues as a base eyeshadow. For lighter complexions, I would recommend Crème De Nude and Front Runner for a more subtle daytime look. That said, I will use a middle-of-the-road beige-y color: ‘And On Bronze,’ to demonstrate how this eyeshadow looks as a base eyeshadow and add more definition to the corners of your eyes.

There are 12 shades available, including:

The shades range from lighter sandy browns to beige to darker browns and a smokey black color. However, some digging around the web brought to my attention that there are also colored eyeshadows like pink and green! At this point, I think it’s worth noting that this eyeshadow is said to be waterproof, crease-resistant, fade-resistant, and transfer-resistant. Later on in this review, I’ll put these claims to the test.

I’m based in the UK, so I purchased the ‘And On Bronze’ shade for £4.49 from Boots.co.uk (at the time, Boots was running a three-for-two promotion on Maybelline products, so you better believe I made the most out of that!). I opted to pick the product up in-store to save on shipping costs. So this is the box it arrived in, which I have to say is pretty unremarkable :

This is what it looks like, inside the box; it’s safely packaged with some brown paper:

This is what the eyeshadow looked like before I opened it:

This is what the eyeshadow looks like upon removing the lid:

This is what a color swatch of the eyeshadow looks like on my hand, with flash:

After ten minutes, I went to wash the eyeshadow off my hand using soap and water. I was pleasantly surprised to see that it was pretty waterproof. You can see for yourself below:

If you’re wondering how I managed to get it off, a cotton pad drenched in Garnier Micellar Water did the trick!

This is what this shade looks like as a base eyeshadow. I have taken pictures with my eyes opened and closed and with and without mascara so you can get a better sense of the full effect.

I then applied L’oreal BB C’est Magic cream ann L’oreal CC C’est Magic cream. Also, because I have vitiligo (for those unfamiliar with vitiligo, this is a skin condition that causes the skin to lose its pigment), I have applied some concealer (in this instance, I used Maybelline New York Fit me).

I then applied the eyeshadow just using my fingers. However, if you prefer, you could use an eyeshadow brush.

When it came to testing the eyeshadow for transfer resistance, I took a normal tissue and gently dabbed it on my eye; this was the result:

I would say it’s pretty transfer resistant. With more vigorous rubbing, this was the result (and before anyone says anything, I’m 100% sure it’s not my concealer!). However, I still think this is pretty impressive!

I also decided to demonstrate what this eyeshadow would look like if you wanted to use it to produce a smokey effect. I used the PROFUSION COSMETICS NUDE BLISS eyeshadow palette to create this look. I used ‘canvas,’ which is a bit like a highlighter.

Then ‘doll’ as a base coat, best described as a light beige. Finally, I applied Maybelline Color Tattoo in the outer corners and a little bit to the crease of my eyelid.

Please note: I needed a sturdy eyeshadow brush to achieve this effect. I wouldn’t have been able to have used my fingers alone, as I needed more precision.

This was the outcome:

Then this is what it looked like 24 hours later:

The Pros and Cons of Using Maybelline Color Tattoo

Having discussed Maybelline Color Tattoo in detail, I’ll try and consolidate what we’ve learned into a quick pro-cons list:

If you’re still on the fence about whether the Maybelline Color Tattoo is the right choice for your next eyeshadow purchase, below I’ve listed a few viable alternatives:

As we’ve already mentioned, the MAC Paint Pot reportedly lasts longer than the Maybelline Color Tattoo, so if you don’t use your eyeshadows very often and you want to enjoy the best possible bang for your buck, you may find that the Mac Paint Pot is a better option for you.

This smudge-free eyeshadow promises to be crease-resistant with long-lasting staying power. Not only that, but it acts first as a primer, then as an eyeshadow and liner too. There are eight shades available – but, unfortunately, none are neutral colors, so if that’s what you’re after, you’ll have to look elsewhere.

It has a velvety texture that’s simple to apply to your eyelid. You can apply it with a standard eyeshadow brush, liner brush, or your finger. The idea is to apply it once and then add as many layers as you like to achieve the look you’re after.

We also like that it’s allegedly suitable for all skin types, plus all e.l.f. products are currently free, vegan, and don’t contain phthalates, triclosan, parabens, nonylphenol ethoxylates, hydroquinone, or triclocarban. The brand advises you to use a waterproof makeup remover. You simply massage it in circular motions and then rinse it away with water.

This product retails at around $5, so it’s an affordable option for anyone looking for a 3-in-1 long-lasting primer, shadow, and liner.

Another long-wearing eyeshadow alternative is Revlon’s ColorStay Creme Eyeshadow. This product promises to give users wear for up to 24 hours. In addition, it boasts a choice of six shades in matte and shimmer finishes and has the advantage of a built-in brush that you’ll find in the cap.

The brush is explicitly designed to make applying the eyeshadow easier and less messy. However, you can still use your fingertip if you prefer to apply and blend your eyeshadow. You can apply the product to your entire eyelid or just across your lash line (i.e., like an eyeliner). Alternatively, you can use it as a highlighter on the brow line.

It has a creamy texture and retails at around $9.69. However, this eyeshadow isn’t chemical-free which may present a red flag to some users.

Question: How can You make Maybelline Color Tattoo Last Longer?

Answer: As we’ve just said, some users complain that the Maybelline Color Tattoo will begin drying up within a few months, rendering it useless (or at least much harder to apply).
Apparently, one thing you can do is add a couple of drops of mixing medium to revive your eyeshadows. However, this will only restore its creaminess for about a month.

Question: How do you Apply Cream Eyeshadow?

Answer: First things first, ensure you’re applying your eyeshadow to clean skin. So, either once you’ve stepped out of the shower or after you’ve used your cleanser.
Then, prime your eyes using either a primer or translucent powder. The latter might be better for soaking up any excess moisture if you have oily skin.
Then, you can apply your cream eyeshadow using either your fingers or an eyeshadow brush. Use a tiny amount – a little goes a long way. Finally, allow time for it to set!

Answer: Unfortunately, not. The phrase ‘tattoo’ is used in the product’s name to describe its long-lasting effect- not because it can cover up tattoos.

Overall, I think that the Maybelline Color Tattoo is an excellent choice for anyone looking for long-lasting cream eyeshadow. Although the eyeshadow definitely faded in slightly under 24 hours, there’s no denying that it lasted much, much longer than traditional eyeshadows.

Plus, its texture is relatively lightweight, a little goes a long way, and it’s definitely crease-proof and transfer-proof. I also like the range of shades available and would like to experiment with different colors.

That’s all from me, over to you! Would you try the Maybelline Color Tattoo? Or do you have any experience using this product? Either way, we’d love to hear your thoughts in the comments box below!

We actually test, try and spend thousands of dollars on makeup and skincare products to ONLY recommend the BEST products that we actually love and will add to our personal collections!

Find out more About Us!